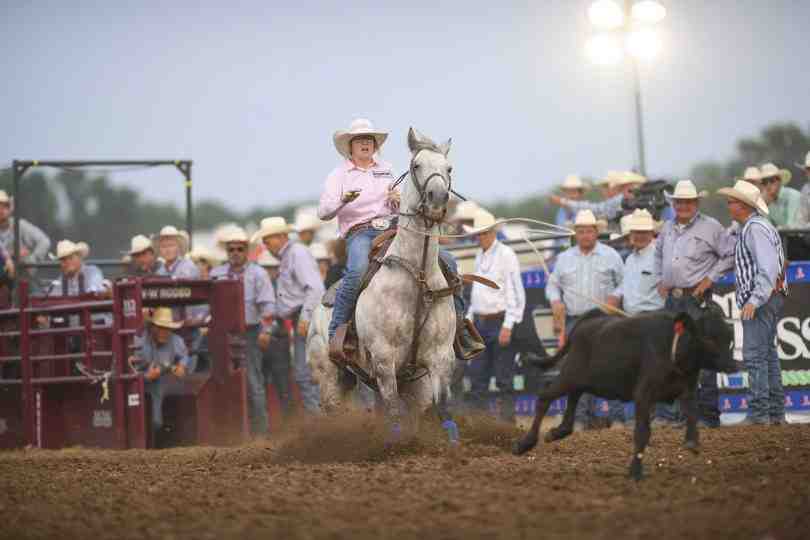 Kendal Pierson on her trusty steed Smoke at the short-go on Sat. July 24 in Lincoln, Nebraska at the National High School Rodeo Finals (NHSRF) breakaway champion. She was third going into the final round and came out on top with a 2.13 second ride. Photo courtesy of AcentricRodeo

Pierson represented Alberta and Canada well, being the first to bring home such a top title since 2010 in the high school division according to the Ram Rodeo Report.

“It was really cool. It’s one of the biggest rodeos and it’s pretty cool because of the contestants from all over so it was a great experience. You meet so many different people and then on top of it you are rodeoing against the top four out of every single state and province and all over the world,” said Pierson.

The last time Alberta was home to an NHSRA world champion was in 2003.

“It was great to be able to represent Alberta at such a high level and to show everyone that we can do it too,” she said.

She ended her Grade 11 year in the Alberta High School Rodeo season as the provincial champion in breakaway roping and fourth in the goat tying.

This qualified her for Nationals.

At the 10-day event, after two runs in the breakaway, she was going into the top 20 short-go in third place.

On the final day of the finals on Sat. July 24 she won the short go at 2.13 seconds and with her three combined times (7.04), she was crowned the 2021 National High School World Champion Breakaway Roper.

At the Canadian Finals Rodeo (CFR) in 2019, Pierson also won first in the breakaway roping with a lightning fast time of 2.45 seconds, making her the first Canadian Finals Breakaway Champion ever as the event was just introduced into the rodeo that year.

When asked what makes breakaway roping the sport for her, she said, “Since I was young I’ve always had a rope in my hand ever since I was seven-years-old. No matter where I went there was always one in my hand so I love roping and with breakaway it’s the fastest event in rodeo.

“There is so much going on in such a short amount of time that everything has to come together really quick. I just like it because it’s fast and you get to work on you and your horse has to work together.”

The Grade 12 student has taken schooling online since last year which has allowed her to spend more time outside practicing her skills and helping around the ranch.

“I like it just other than I don’t get to see any of my school friends but it opens up my day and gives me more time when I’m working towards my future,” she said.

Pierson has plans to most likely attend post secondary down south of the border on a rodeo scholarship and compete at Professional Rodeo Cowboys Association (PRCA) rodeos in the breakaway category when she turns 18 years of age.

Terri grew up on a grain farm near Drumheller, Alberta with an eye for the beautiful and uncharted. Living in such a unique and diverse area has helped her become the photographer and reporter she is today.

Coming from the East Central region getting this newspaper on her dinner table growing up, it helped her understand the community she now serves.