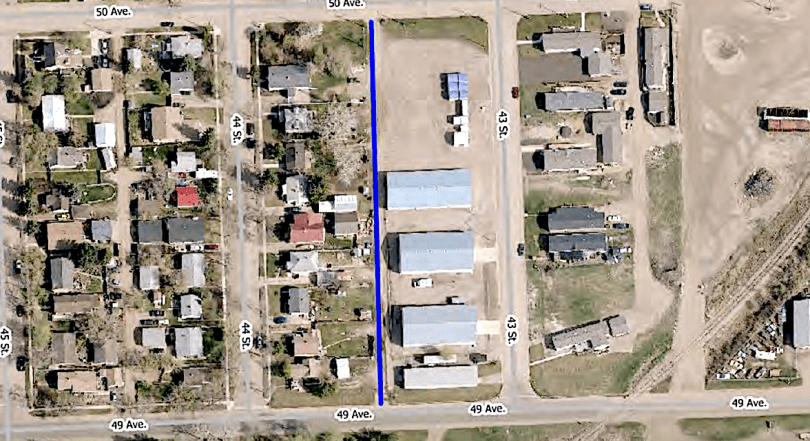 Town of Stettler watermains to be worked on this summer. ECA Review/Submitted

Director of Operational Services Melissa Robbins presented councillors with the results of two tenders which were publicly advertised.

“Approved 2021 capital budget is $130,000 to replace miscellaneous sections of concrete throughout the town to ensure compliance with Council Policy XV-3(a) – Sidewalk and Pathways Inspection and Maintenance,” stated Robbins in her memo to council, also noting that this sidewalk replacement work is a regular part of the annual town budget.

Councillors unanimously awarded the 2021 sidewalk replacement tender to Hadley Contracting in the amount of $119,065.45, and approved expenditures up to $130,000, excluding GST with funding provided by the 2021 capital budget.

Robbins then presented the tender results for the 2021 capital budget project to replace the water main and water services in the back alley east of 44 Street between 49 and 50 Avenues.

The director noted $280,000 was budgeted by town council for this project.

Again, Robbins noted the tenders don’t include GST or contingency.

Robbins noted the low tender, Watson Welding, has not performed water main replacement work before for the Town of Stettler although the company submitted two references for the town to examine and both came back with good results.

Councillors asked who the references were and Robbins noted they were both other municipalities.

She stated the project in question is not overly complicated so she’s comfortable working on this with Watson Welding for the first time.

The director stated that the water main work in that alley should take about six weeks to complete and no start time has been identified yet.

Councillors unanimously approved awarding the water main replacement in the back alley east of 44 Street between 49 and 50 Avenues to Watson Welding.